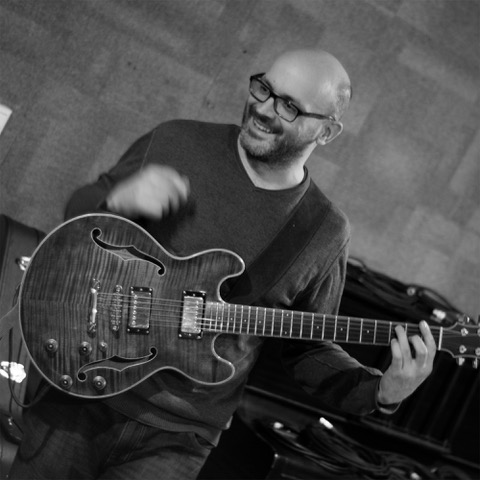 Guitarist, composer and arranger Neil C. Young has been recording since 2005 with the release of his first recording, the 3 track E.P. ‘Take a seat’ which Keith Ames of the Musicians Union, declared ‘Excellent feel good instrumental jazz!’. Since then Neil has released 2 further EP’s (My Crazy Pony + Chick(pea) Soup) and two albums ‘Where’s yours?’ (2010) and ‘El Camino’ (2011) which were distributed through Canadian American Records (U.S.A) and WOA Records (India.) Both received initial entries into the Grammy awards by Canadian American Records in 2011, 2012 and 2014 in the Improvised Solo, Instrumental Jazz and Jazz Single categories respectively. Incorporating aspects of bands led by John Scofield, Herbie Hancock, Keith Jarrett, George Benson and Billy Cobham, the music is ‘full of soul and energy’ and, ‘the arrangements are beautiful’, writes Eric Elias from the US magazine “Just Jazz Guitar Magazine”.

Neil was kind enough to answer a few questions we had, here is what he had to say.

How did you first get into music?
“I’ve been around music all my life, my dad is all music, teacher, composer and conductor so it was always about. My brother and I grew up with instruments knocking about so we pretty much been at it since we arrived on this earth.”

How supportive have close friends and family been?
“Incredibly. As mentioned earlier my dad and mum both are involved in making music and have been there when growing up to enable me (and my brother) the chance to make and create music. Also, very lucky in the fact that the majority of close friends are either musicians or involved in the arts in some way so there is always support there and encouragement to get on and do it!”

Where do ideas for songs come from?
“Everywhere. My favourite one so far was in Granada in Spain by the green man on the traffic light to let you know when it was safe to cross the road. Somehow the green man had a hat and walked with you as crossed the road, safely!”

What has been your favourite gig you have done so far?
“Hmm, It’s close between playing in Zihuatenejo, Mexico and Holguin, Cuba. But there are individual gigs that are part of the regular cycle that catch you by surprise for the really great collective feel of the night on stage. You just never know, its not always about the grandeur its mostly to do with who else you are playing with, are you all having a great time or not!”

What is your favourite song to play live?
“It changes due to the fact that each gig has a different set list. But in saying there are a few tracks that I always try to get in there regardless of who else is in the banc. A Mouse lived in a windmill is a good un, gets em singing along, not bad for a ‘jazz’ gig! My arrangements of ‘Them Bones’ (Alice in Chains) and ‘Video Games’ (Lana del Rey) get in the sets more often than not and then of my own creation the new single ‘Run Fishy Run’ is a challenge, a good one even if a very physical one!”

Any new tracks coming up?
“I am currently recording new material for the new album which hopefully should be ready by the end of summer/early autumn. Trio stuff mainly with some tracks having some String arrangements involved. ‘Run Fishy Run’ is the current single from that but there is another single yet to be aired ahead of the album release so keep an ear out for that one.”

What was the music scene like where you grew up?
“Very good. I was lucky in that I was involved in youth orchestras and music centres which meant that I was always in and around rehearsals and concerts and other like minded people. Colne is the town where I went to school and that provided and still does provide a very healthy band scene of all types, gypsy jazz to metal and everything else. Its a very supportive scene to be involved in and its always great to gig and hang out there see what everyones up to.”

Do you have any funny/interesting gig stories you can share with us?
“Seeing a picture in the local paper of a certain other Neil Young advertising my gig in Cuba. Hmmm, interesting and funny, especially when I was informed there was a cue for autographs outside. I politely pointed out that they were all probably expecting a far older and hairier fella.”

What are your plans for the rest of 2017?
“Finish recording the new music, keep gigging and practicing as much as possible.”

If Neil C Young Trio had to be remembered for one thing what would you like it to be?
“They always had a great time.”

What was your first ever gig/concert and how much of an impact has that had on you?
“Two answers for this one. First concert that I can remember was in Lichfield Cathedral listening and watching a production of King Arthur which was written by my dad and Pam Sandiford. I was maybe 5? But the location and the sounds that I was hearing were vast and magical that were created by the musicians and the building itself.”

“The first band gig I went to was The Alarm at the St. Georges Hall in Bradford. I went without knowing any songs, only heard one or two on a tape lent by a mate and had a proper good night. The power and huge sound that the 4 of them created, on stage, mainly through the guitar work of Dave Sharp, has stuck with me. I detect a theme here. Big. Maybe…”