The State Of Art 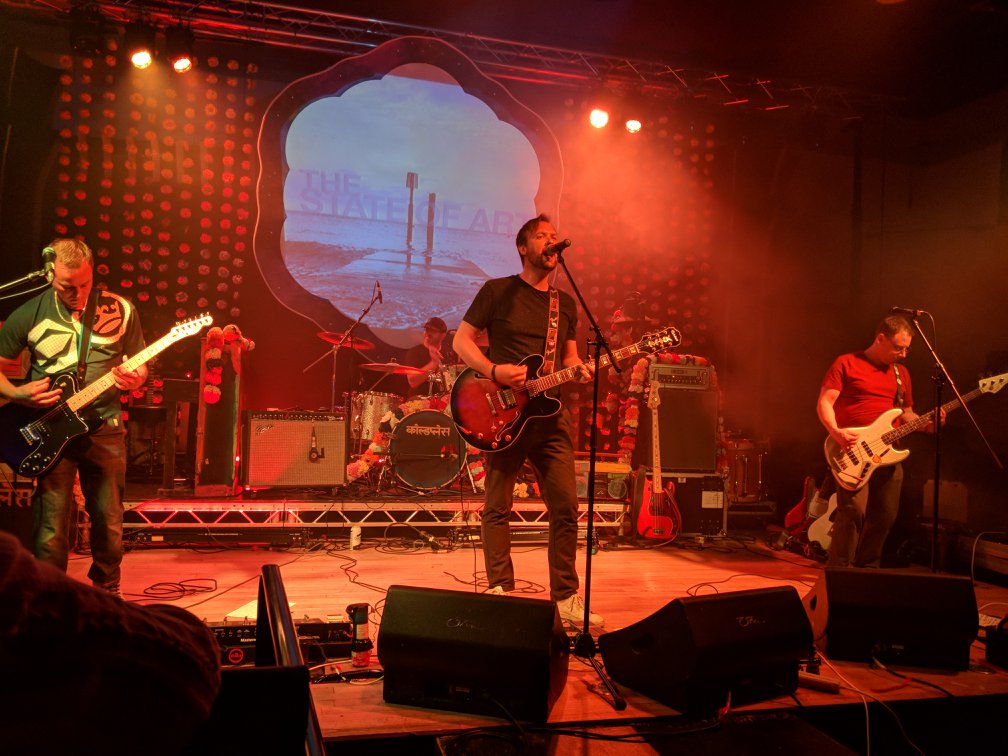 The State Of Art are a four piece Alternative Rock band from Grimsby made up by Andy Downes (Lead Vocals, Guitar), Martin Johnson (Bass, Backing Vocals), Mark Stewart (Lead Guitar) and Martin Ellis (Drums, Backing Vocals). In 2011 they released their EP called “Mexican Flag”, The song “Better Plans” received airplay on the “Introducing” sections of BBC Radio Humberside, Lincolnshire and Derbyshire. In 2016 they started self-recording and producing an album with mastering carried out by Matt Cade (Not Tonight and the Headaches, Simon Wells, Down By Law). Songs from the album received positive responses and airplay on BBC Introducing Humberside and Lincolnshire, resulting in a live session for BBC Introducing Humberside which can be found on YouTube.

The lads were kind enough to answer a few questions for us, here’s what they had to say.
How did you all meet?
Ellis – “It pretty much goes back to me and Johno meeting in the first week of secondary school and discovering we had similar tastes in music. During school we formed our first punk band “Burnout” playing Green Day, Offspring and Rancid covers and eventually our own songs. At college Johno met Andy and Mark who played drums and guitar respectively in rock band “Silverspoon” and we played a load of gigs together at venues that don’t exist anymore (Cartergate Rooms in Grimsby and The Winter Gardens in Cleethorpes). When those bands split up, Johno and Mark played together in another band called “Tag 22”. Andy formed The State of Art in 2007 with a totally different line-up. I joined not long after but had to leave because I got a job out of town. I remember hearing a recording of Mexican Flag and being gutted I wasn’t in the band anymore but got another chance in 2009 when the line-up changed, and I brought Johno along for the ride. Following the release of our album last year, we brought Mark on board as an old friend and someone who we knew could bring something extra to the band”

Who inspired you to want to be in a band?
Andy – “Listening to my Dad’s Queen, Def Leppard and Sex Pistols records. He had taped a lot of them for the car so when he was working away I would listen to them and sometimes accidently tape over them! Picked up the guitar just as Suede released their debut album and Definitely Maybe came out, which was a revelation for a new guitarist. After that, I was desperate to get in a band and started to play with friends at school”

Johno – “I discovered alternative and heavy music as a teenager and that was pretty much it – I wanted to be in a band and rock out. My formative influences were bands like Green Day, Nirvana, Therapy? and Foo Fighters, with a sprinkling of Britrock and Indie bands like A, The Wildhearts and the Manics. Latterly, I’m mostly just trying to improve and push my abilities – listening to proggier music (e.g. Mastodon, Rush) helps in this regard”

Mark – “I’ve always been around rock music, my Dad used to play guitar in bands and would even build his own. I was brought up on a diet of Black Sabbath, Pink Floyd and Led Zeppelin to name a few but the album that made me pick up a guitar was Nevermind”

Ellis – “My earliest music memory is my Mum’s ABBA collection which I hold responsible for my guilty pleasure of catchy pop. My Sister was my main musical influence though because she would always record tapes for me of bands like Blur, Teenage Fanclub, Primal Scream and The Jesus and Mary Chain. The first band that really resonated with me was a band from Hull called Kingmaker but everything changed when she gave me a tape with Nevermind on one side and Troublegum by Therapy? on the other. Johno then introduced me to Green Day, Offspring, Foo Fighters and heavier bands like Fear Factory, Machine Head, White Zombie and Sepultura. The next musical revalation was skate punk, bands like No Use For A Name and Lagwagon are my main influence now so when I get the chance, I love to play fast and aggressive”

Andy – “As you can tell, the band has quite eclectic tastes. Being the chief songwriter, the Indie influences come out a lot more, but the rest of the guys bring an extra heaviness to the mix which I like to think defines our sound”

Ellis – “I think our first gig with me and Johno was at The Spiders Web, Grimsby and probably at the same venue again in this incarnation with Mark. The Spiders Web is a bit of an institution for local gigs, a small room and stage but has been home to many excellent shows over the years”

You released your self-titled debut album last year can you tell us a bit about it? Andy – “The album was recorded at mostly at our homes and the studios at the Grimsby Institute where I work as Programme Leader for our music production and performance courses. All the loud bits were done in our studios and the more considered parts done at home on laptops. It was mixed and mastered by Matt Cade, who is responsible for the new Down By Law album. Many of the songs are about injustice in many ways. I get a lot of inspiration from watching people’s behaviour. For example, Captain of Industry is influenced by those tin-pot business men/women who breeze into their bar or restaurant, flashing cash with the Bentley parked outside, when the wage bill of the minimum wage staff isn’t getting paid and the credit card is maxed out! I suppose it’s about bullshitters and how much we’re sick of their bullshit! There’s also a little about our past and the importance of not looking too deeply into it”

Ellis – “For me the album was a bit of a preservation project. We’ve all been in so many bands over the years and when those bands split up, the songs just disappear, never to be heard again. It’s nice to have a copy of those songs for ourselves now and great that other people are enjoying the album too, it’s certainly given us motivation to write and record even more”

What has been your best/worst gig?
Andy – “Our best gig has to be one we played the other weekend supporting Coldplace (Coldplay Tribute) at the Cleethorpes Beachcomber because it was such a great crowd and professionally run. However, a gig we played in Doncaster in 2015 is important to me because after a year off writing and recording and generally getting nowhere, we finally came back out of our shell…which paved the way for where we are now, with Mark on board doing amazing things like 750 people at the Beachcomber and BBC sessions. It really has been a good few years for us since that time”

Ellis – “Worst gig could be anywhere no one turns up and you’re just playing to the other bands. One such gig sticks in my mind where the only people who came to watch were our partners. No one in the relatively empty bar was bothered that a band was playing, and one couple were having an argument about the guy not giving his partner a Valentine’s card. His response of “I did get you one, it said ‘Fuck Off’ on it” still makes me and my partner laugh to this day and is often used”

Are there any plans on releasing any singles/EPs this year?
Andy – “Yes – we hope to go into the studio and record the material we have been working on with our new guitarist Mark. It’s different stuff! Despite the first album being quite heavily produced, this one will hopefully use the studio to our advantage more. The songs are a mish-mash really, some a hangover from the first album, by which I mean the same vibe and pace. Others are different, slower and darker. I always thought of the first three albums as a kind of trilogy; first one is us bursting out of the gate, second more considered and perhaps a progression in quality and lavishness and maybe the third a stripped back return to roots”

What are your plans for the rest of 2018?
Andy – “Recording mostly – perhaps a few gigs around the place to keep our eye in”

Ellis – “We focussed pretty heavily on getting our set polished for the Coldplace gig so don’t have anything lined up yet but will certainly get back on booking more gigs. Would be great to get around the country a bit more”

What is the music scene like where you’re from?
Andy – “It’s hard to be positive at times. When we started in the mid-nineties it was great. Loads of bands and venues that support new music. Now, it’s kind of metal or punk. From my point of view, being exposed to the professional way of doing things, I find it difficult to slum it like we used to. I like a modicum of professionalism nowadays, otherwise I don’t think there is any point. As we’re older now most of our mates have other commitments, some even nursing their second marriages so can’t come out to show support!”

Ellis – “There was a lot of punk back in the nineties in the Grimsby scene but back then people didn’t really care about mixed genre gigs and would turn out just for the sake of seeing live music. There are certainly some groups of people putting the effort in around here and arranging gigs, but it does feel like the appetite has died down over the years”

Are there any gigs lined up for this year?
Ellis – “Nothing lined up yet, as I said, we focussed pretty heavily in being prepared for the Coldplace gig but definitely interested in playing more. If any venues/promoters are reading this then feel free to get in touch and any gigs will be posted on our social links”
By Oliver Cooper