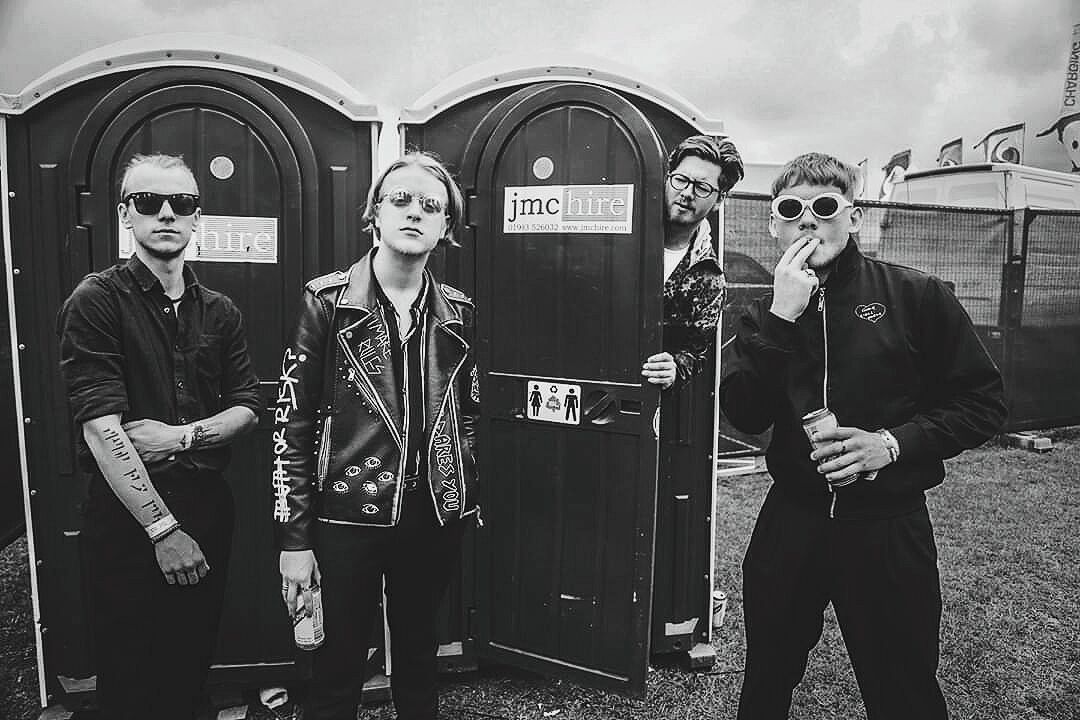 Overflowing with attitude and a ruckus of a live show, GETRZ have just finished the rounds of the festival circuit. They packed out stages at Truck Festival, Isle Of Wight and Y Not following the release of their latest single ‘She Heard I’m A Dreamer.’ One of 5 tracks on their brand new EP ‘Think Of The Future’, their sound hasn’t gone unnoticed throughout the industry – Gordon Smart at Radio X and Josh Hannen at Amazing Radio are amongst the names to have given them spins, not to mention having their tracks added to Spotify’s ‘Hot New Bands’ playlist.

We managed to get the band together during their busy schedule to answer a few questions we had, here’s what they had to say.

“We all met at college and then we decided we’d form a band in our local boozer, The Victoria”

Growing up who was your musical influences?

Josh – “Watching Glastonbury and other festivals on TV made me want to be in a band. Predominantly OASIS” Dec – “Same as Josh really, I used to watch the Glastonbury highlights on BBC three every year and it just made me want to play live music ‘till I die. One set that rings a bell is Two Door Cinema Club in 2010 I think” Dan – “Dave Grohl”  Toby – “I was sick of doing nothing and music always interested me when I was younger. Thought it would be pretty mint being involved in something I love, instead of working a 9-5”

Where do your idea for songs come from?

“We write our tunes based on our experiences in life. It makes our music more meaningful to ourselves and our fans”

Can you describe your music in three words.

Do you have any funny/interesting gig stories you can share with us?

“We played in Paris in 2017 and sold out the show. We all got quite thirsty on stage and the crowd lovingly ordered us each a beer and passed them from the bar at the back of the venue to the stage mid set. Was a very wholesome experience, we can’t wait to return next year”

What has been your best/worst gig?

“Best gig: YNOT Festival this year was insane. Worst gig: We played a show in Witney in 2017 to literally a couple who had come downstairs from the Italian restaurant above the venue after their meal”

“The Swindon scene has really grown exponentially this past year or so. A great variety of bands ranging from indie rock to metal. It’s like one big family”

You have a new EP ‘Think Of The Future’ can you tell us about it?

“Our new EP has been in the making for the past year, it’s a summary about everything we have experienced recently. It holds a very firm place in our hearts and is probably the heaviest music we have released to date. Go and check it out see what you think”

What is your favourite venue to play?

“We have played at some amazing venues such as the Joiners in Southampton, Monarch in London and  Le Truskel in Paris. But all in all it’s a massive pleasure to play at the Victoria in our hometown of Swindon”

Can you tell us about your music?

“We want our music to be as relatable as possible with the generation we are growing up in and also the ones around us. Between all of us it is also used to get all of our aggression out and how we feel about current topics in our personal lives”

“So next month we are going on tour and revisiting some cities that we have been to before such as Liverpool and Birmingham. But also we are visiting places that we have never been to before, these include Glasgow, Hull and Swansea – so it will be great so see what response we get from the crowd!”

“Our plans for the rest of 2019 is to just keep gigging and getting the word out there. It’s also nice to keep writing new tunes and the ball rolling so we can see what different directions we can go in with our music!”

GETRZ EP ‘Think Of The Future’ is available to stream now on all platforms!