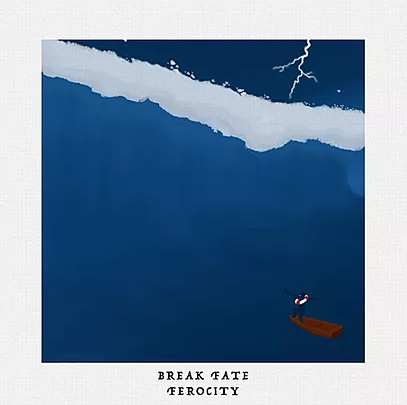 Inspired by bands such as Knuckle Puck, Tiny Moving Parts and Mallory Knox, your friendly neighbourhood Rock band ‘Break Fate’ was forged in late 2017 by lead vocalist Mashana and lead guitarist Ricky. Their beloved drummer Oliver joined the band a couple months after. Like the final missing piece to the puzzle, the band was complete. Before 2020, Break Fate released two songs titled; “Miraculous” & “Blackout”. They are now ready to unleash their debut album. An album built by three dudes trying to give hope to a hopeless world. Packed with themes of growing up, self doubt, heartbreak and a dash of existential crisis.

Their debut album ‘Ferocity’ is a little over 20 minutes of pure rock anthems that you will enjoy listening to, it has the 00’s rock sound to it which I loved mixed with a modern Break Fate twist. Lyrically it is hard to fault the album and with the mix of great vocals and instrumental play by the band it makes this album a treat for the ears to hear. I love the rawness and energy that has been put into this brilliant album, the band have also showed they are not afraid to make their own sound that stand out from any other band I can think of.

My favourite track from the album has to be ‘Ender’ it’s full of emotion. I found myself listening to every word Mashana sung. It instantly grabbed my attention and I found the lyrics very relatable.

A great debut album from a talented band.

One thought on “Break Fate – ‘Ferocity’”