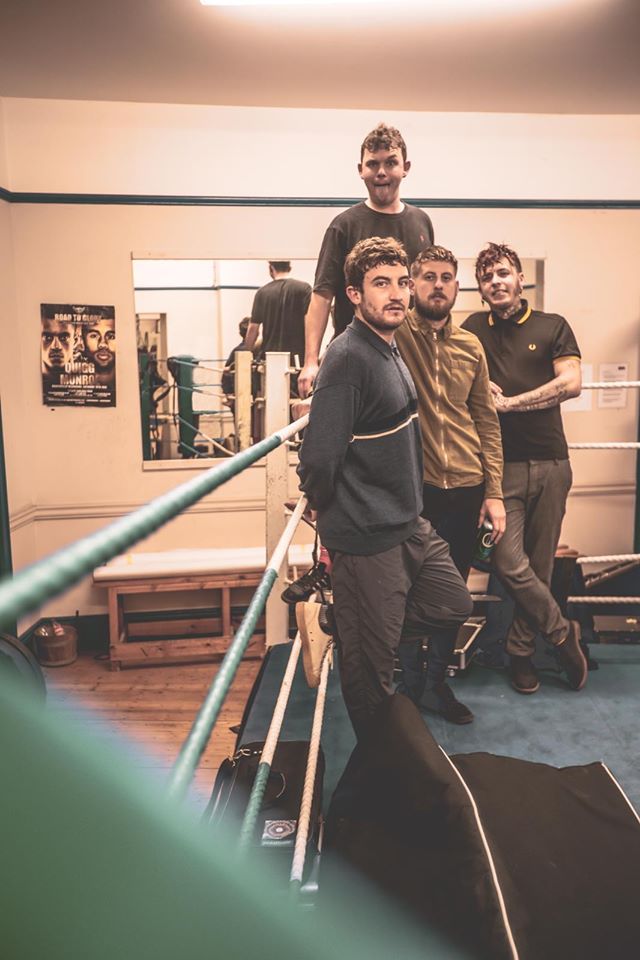 Here’s what Danny had to say when I got a chance to ask some questions have a catch up with one of my favourite bands from the North.

“All 4 of us are Leyland lads, who have all grown up and gone to school in Leyland. Me and Baj have been mates since around 7/8 when we joined the same football team Leyland Albion. Jimmy is Baj’s Brother, so I’ve known Jimmy just as long as Baj really. For whatever reason, we never came across Matt growing up which is strange coz everyone knows everyone in Leyland haha! I was introduced to Matt when I was 23 (4 years ago) through my friend Liam who was working with Matt at the time. Soon as me and Matt met, that is when the band was formed!”

“Oasis have played a big part in our influence as a band, all 4 of us love Oasis and when me and Matt decided to start the band we agreed that we wanted to kinda recreate britpop. We both agreed there was an interest in that era again and felt we could really do something If we tapped into that genre. There are other big influences as well as oasis, each one of us have different interests really, which is good as it adds more depth to our knowledge on what we want as a band really. Baj is a massive chillies fan and Jimmy is into a lot of old punk / grunge. All 4 of us a big hip hop fans too”.

“For me personally it was the summer of 2011/2012 can’t remember exactly. I went through a period of just buying loads of albums and listening to them in their entirety which I had never done before. I’d always just listened to single tunes from Bands, never sat and listened to an album apart from the odd one. It completely changed my perception of music and made me love it more, after that I was hooked. Then I started playing guitar in 2013 and it just grew and grew then”.

“Tough question! We love them all and there’s been some proper highlights along the way so far, but I think all 4 of us would agree that Manchester Academy just before we locked down in March this year was the best to date. Pretty mad walking out on a stage that you’ve watched bands like Courteeners, Blossoms and DMAs on. Played with 3 top bands on the night who are all good lads as well so bring backstage with them having the banter and that all added and there was also a 100 seater coach that came up from Leyland which was full, so that made it the special night it was”.

“We have a new 4 track EP coming out VERY SOON, we can’t confirm the date yet, but it will hopefully be within the next 4-6 weeks. Originally it was planned for a May release, but obviously the world has kind off stopped for the last 2/3 months so we’ve had to delay. The tracks are just being mastered now, so the release isn’t too far away. This new EP I think we’ve taken another step forward from our last release ‘Lay It On Me’ back in October 2019. All 4 of us are big DMAs fans and I think you can definitely hear the influence in this new release, again it’s has a massive britpop vibe to it, which is the case with all our releases so far”.

“I think our story is quite unique, the way we were formed, most bands grow up together as a little gang and work for years in the studio to form their band. I only picked up a guitar for the first time like 5 years ago, Baj had not played drums for like 10 years and Jimmy has never picked up a bass guitar until we formed the band in 2016! So, to think where we are now is pretty mad really. That is why I’ve described our music as raw in the last question because it really is. I think our live performance also separates us a bit. We love being on stage all 4 of us. We are quite lucky really that we all enjoy it that much we don’t tend to get nervous or overthink it which I think a lot of other bands do. Again, our live performance is pretty raw and I think that’s why we’ve got the reputation of being ones to watch out for when playing live”.

“I think like all bands / musicians, we want to get back gigging and doing what we love. When that will be, if it is even this year, we don’t know but that’s what we want the most. We have this new EP coming out and another little surprise for people over the summer. So, keep your eyes peeled. You never know there could be another release after this EP before the year ends. I’m always writing so we’ve got plenty of material to work with”.

“We are playing yana festival in Manchester which has been rescheduled for November. Apart from that, nothing to confirm yet due to the uncertainty around this virus. Follow us on social media for all updates around gigs etc”.