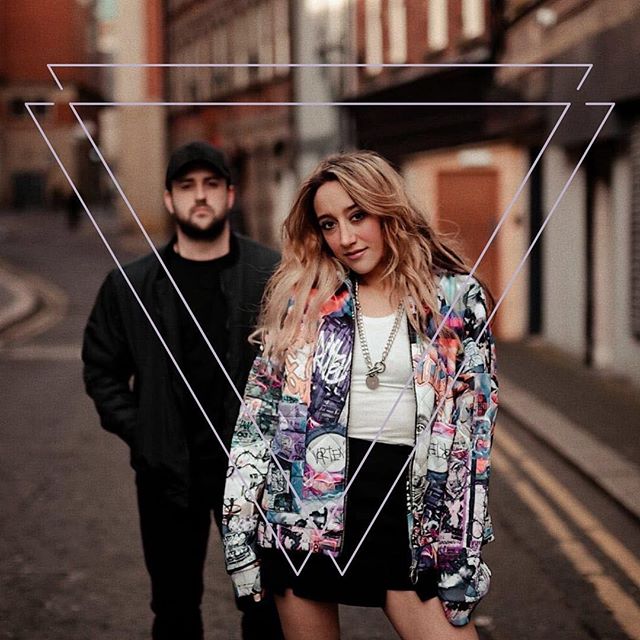 MOODBAY are producer-songwriter Alfie Cattell and vocalist-songwriter Anna Stephens. They are based in the North East, UK. Their unusual shade of electropop incorporates a range of genres from R&B to Classical – the duo describe their sound as ‘moodpop’. They got together in 2017, after meeting in the corridor of BIMM music school in Manchester.

I got the chance to ask Anna and Alfie some questions, here’s what they had to say.

How did you two meet?

Anna: “We met when we were both studying at music college in Manchester. We had bumped into each other a few times, but never really got talking until one day when we started talking about musical influences and realised we had a lot in common! From that day on, we started writing together non-stop. We started gigging in Manchester together shortly afterwards too, and got to know some of the great venues there”.

Alfie: “The Beatles were the first band to truly inspire me. I used to listen to them with my two brothers – who are both guitarists and songwriters. When I was 14 I taught myself the piano which also inspired me to make my own compositions. I think listening to The Beatles made me want to get into music in the first place. Radiohead are my all time favourite band. I think my favourite album of theirs is probably ‘In Rainbows’. It fuses electronic elements, amazing songwriting and instrumentation, with classical composition, incredible Johnny Greenwood effects, ambience and textures and sound design he puts in, and a really interesting groove I could never do myself. I love how emotional Radiohead are with their music, and how much they pay attention to detail”.

Anna: “I used to listen to all the music my Dad used to come home with – David Bowie, Elton John, Annie Lennox, Johnny Cash, The Fugees, The White Stripes, Blur, Arctic Monkeys and Amy Winehouse… the list goes on really. It was constant variety – our house was like a CD store! On the other hand, my mum has always listened to classical music and also plays the piano, so I grew up listening to her playing Chopin’s Nocturnes and listening to Vivaldi and Beethoven”.

Alfie: “My brothers Danny and Sam, who are both very talented musicians and songwriters. We’ve played in a few bands together over the years”.

Anna: “I wanted to have a platform to create art and express myself. And music turned out to be the best way for me to do that – before then, I had always been more of a visual artist. But I started writing and realised I could make songs out of my words and then the desire came to be writing with others and making it into something more concrete”.

Anna: “Though we’ve been fortunate to play some pretty big gigs last year, it is always the more intimate ones we like best of all. We’ve played some really nice gigs in smaller venues across Manchester and also the North-East. One stand-out was a gig we did supporting indie band Plastic Mermaids at Think Tank? in Newcastle”.

Can you tell us a bit about your music? E.g. any new singles?

Alfie: “We’ve been writing constantly for the past few years, and so have multiple singles recorded and ready to release, but we’re spreading them out so as not to bombard people, and also while we’re still building the band. We want to release an album to an audience that will have a taste of what Moodbay is about, rather than just drop 12 songs now. We are still developing our sound too, it’s been through a few stages – we can do dance, but also synth pop and more soulful groove-driven tracks too. Now though, we’re looking to write some more minimal songs with a main focus on the vocal”.

Anna: “We have two new singles out this month – I Got You, a dance track on July 10th, and a more indie track, Like Nobody Else on the 24th!”

What makes Moodbay stand out from other bands?

“When we perform Alfie wears trackies and shoes with holes in them”.

Anna: “Our plans involve writing more and recording more. And also listening more – I think it’s important to keep your ears open to what’s being released out there, and what other bands are creating. We also love watching other bands, especially local ones”.

Anna: “Being nice people without big egos! And great live shows – although that probs still counts as music :)”

I know it’s difficult to say at the moment, but do you have any gigs coming up?

“We wish! We had to cancel a gig we had lined up with the wonderful Shingai (of chart-topping band The Noisettes), which was at our favourite venue in Newcastle – Cobalt Studios. We’ll see if it’s rescheduled though”.