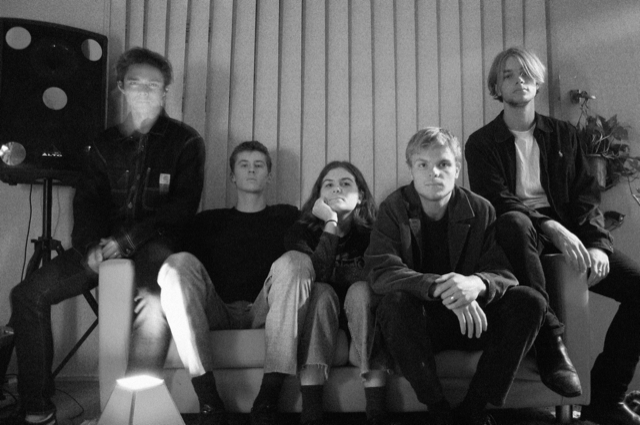 The Nagging Doubts were still at High School in Sydney when they made their first acclaimed EP, Deug Lane, which was lovingly catapulted into the world via ex-Lemonheads drummer Nic Dalton on his label imprint Half A Cow. A year on and, following an introduction by Dalton, the band found themselves in a studio working on mixes with acclaimed producer Wayne Connolly (The Vines, You Am I, Youth Group) and stepping into a new direction: all darkly simmering, glittery post-punk ambience; and punchy, hook inspired baselines.

This new aesthetic announces The Nagging Doubts much anticipated EP Autocalm with a double a-side release Berlin / Marine, the second release through Connolly’s own record label Scenic Drive. Berlin / Marine hints at what is to come from the EP; a feast of diverse sounds, and a young band showing they are not afraid of travelling to all points of the compass to find their sound. The band’s mission is to absorb but not mimic the great artists of the last decades, thankfully exposed to the 5-piece through their parent’s superb vinyl collection.

“The four of us guys met at Tempe High School in Sydney many years ago and were lucky enough to have Ruby (Tom’s cousin) join the band about a year ago after our old lead guitarist left”.

Joe: “A lot of post-punk stuff, like joy division and overall my biggest influences would be the velvet underground and the replacements”.

Tom: “White stripes definitely encouraged me to pick up the drums growing up. the Cramps, Nevermind by Nirvana. Alex Chilton too”.

Gabriel: “Around the house Mum used to play a lot of the slits, XTC and the birthday party, always pumping it in the kitchen. My Dad loved all the 70s stuff so I also got a good dose of the eagles, bob Dylan, van Morrison and the doors”.

Ruby: “Jeff Buckley’s album Grace influences the songs I write and the way I sing a lot. I’m a big fan of our very own Courtney Barnett and also enjoy a lot of contemporary jazz like Hiatus Kaiyote”.

Eden: “Dad only had Bob Dylan and Bob Marley playing around the house growing up, which I began to revisit a lot when picking up the guitar. More recently I’ve been listening to a lot of RnB guitar stuff like Isaiah Sharkey and Anderson. paak and The Free Nationals”.

“A lot of our parents were in bands or at least heavily involved in the live music scene when they were younger so a lot of the passion has just come from growing up around the anecdotes and culture around that. We used to jam during recess and lunch in the music room during high school and one day me (Joe) and Tom brought a Soundcloud demo EP to Eden and Gabe and they learnt how to play some of the songs and off we went…”

“Our best gig would have to be the first time we played at the Vanguard. It was our first time with a more professional set up so we were nervous but also elated. There was a lot of energy in the room on the night and I think we left a serious impression which gives you a lot of confidence as a young band.”

“Our two new singles have been in the works for a while now, recorded up at the Grove studios in Gosford (NSW Central Coast) pre-covid. Berlin was written after and about Joe’s travels to Europe. Marine was written on an acoustic guitar Tom and Joe took on a trip to Newcastle on the Central Coast just after Joe finished the HSC. They’ve been through a lot of revision and changes, so we’re super excited to finally present them to the public”.

“Our aim is to put out music with some backbone to it. Our sound doesn’t reflect the oversaturation of happy-go-lucky indie pop that’s very big in Australia right now”.

“The goal for the rest of the year is to finalise everything for our EP Autocalm which will be released in Feb next year. We also want to keep playing gigs and continue improving our live performance”.

“We’ve got two shows lined up this month in Sydney. One at Waywards in Newtown on the 12th and then one supporting the Pist Idiots at the Marrickville Bowlo on the 27th”.