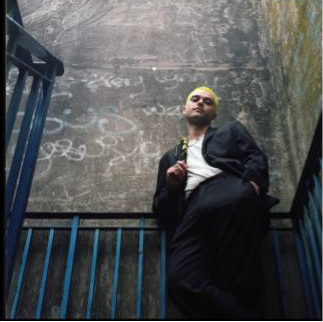 George Eve’s early independent tracks such as ‘My Girl’ and ‘One Track Mind’ gave the young singer-songwriter his first airplay, which included support from Jack Saunders at Radio 1 and BBC introducing. Those two tracks saw George’s talent nurtured by influential collaborators such as Ben Baptie (Rex Orange County, London Grammar) and Benjamin Miller (Julia Michaels, Anna of the North).

We got a chance to ask George some questions, here’s what he had to say.

Can you tell us a bit about your new single Gates?

“Melodically its really influenced by RHCP’s ‘By The Way’ album, so lots of what would John Frusciante do! It was spring and I’d been writing a new song everyday for like 6 weeks and then ‘Gates’ came out of the ether fully finished in like 5mins flat… I tried to be super honest lyrically because it felt like a song that deserved the truth and that helped me feel positive at the time, I hope the recording can help others feel positive too”.

Tell us about the video and the creative behind it.

“I wanted to make an honest video to match the honest lyrics. I figured the best way to do that was alone with an iPhone, it was lockdown, so I just went around London with my iPhone and took videos of my favourite nooks and crannies. I edited all the footage I’d filmed and added some stuff I found online. I’d never edited before, so it was fun to learn to do that with the ‘Gates’ footage. Umm….My ex is in the vid… it was filmed post breakup – eek! Annndd, Lana Del Rey’s ‘Video Games’ video was a really big influence!”

“I tried to include as many influences as possible in the music with no prejudice over genre. There are idea’s in the songs that were taken from all over the place: EDM, trap, rock, pop, classical and everything in between. I tried to bring all those influences together in a way that still felt simple for the listener and I also tried to centre everything around a guitar… because I love guitars and rock n roll! Because of all of that I hope that it sounds new and familiar at the same time and I hope that makes it stand out!”

“I’d like to help people, especially if they’re struggling with mental health issues. I’ve had a big introspective journey this year and I’ve learned a lot about the nature of my own mental health struggles. If it could help others I would love to share what I’ve learned on how to cope and not go under”.

“Yupp! I’ve got a virtual gig coming up for a gig called ‘Home School Night’, its gonna be streaming in Twitch and I’ve got a great band playing with me! Please check it out, it’ll be worth it!”