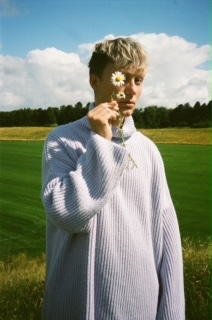 Gaspar Narby’s fusion of lush broken beats, downtempo melancholia and singer-songwriter reflection has been rewarded with a broad sweep of tastemaker tips from new music and electronica media alike. Now the 25-year-old Swiss artist puts a new twist on his artistry as he shares his new single, ‘Death & Other Things’, alongside its official video.

My parents listened to a lot of music. CocoRosie and Boards of Canada are two that marked me. Sampling pioneers The Young Gods were my first concert and they’ve been hugely influential on me as well.

Tell us about your new single Death & Other Things?

“Death & Other Things is a song about the mistakes I wished I had done or the successes I wish I hadn’t experience. It’s about growing up and being scared that I’ll never fit it. Fun fact: I actually did ask my father whether I should kill myself the day I turned eighteen. He recommended I didn’t”.

What can you tell us about your upcoming EP?

“It was mostly written on guitar, which was new for me. It led to more simplicity and more story-telling in the lyrics. Only then did I put on my producer’s hat and went on to work on the material as if it belonged to a songwriter I’d never heard of. I think the process was about making myself uncomfortable: the songs are about the parts of myself that I’m scared of, from my need to feel seen, and my fear of growing old and dying, to the occasional absurdity of existence, and how bad I can be at communicating my feelings. Singing in itself took me out of my comfort zone”.

Describe your music in 3 words

If you could collaborate with any other artist – who would that be and why?

“Frank Ocean. Because i’d get to witness his singing and look at his face in real life”.

Where do you get your inspiration from when writing songs and also your visuals?

“I write fragments of lyrics when I read, watch series, have conversations, so from life I suppose! But then there’s a lot of work and trial and error, sitting at my desk and feeling like a total failure because I can’t write”.

“My homemade pizza dough is already officially what my friends remember me for!”

“Being kinder to myself would be great! Sharing my music, live or in any other way, with as many people as possible would be amazing as well. Cultivating my relationships with the amazing people around me, and meeting and collaborating with new people”.