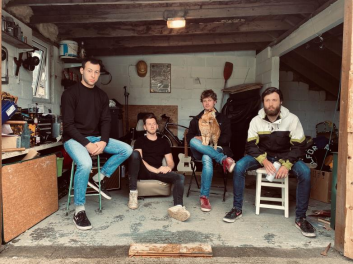 Wolforna are a four-piece rock band from West Yorkshire, UK, that formed in January 2019. Initially a trio acoustic band, Jack, Adam, and Alex had played music together since the age of 15, and after being in various cover bands, decided they wanted to start writing music of their own. As of June 2020, with a change in direction in sights, Oli Barraclough joined on drums making a four-piece rock band.

Here’s what the band had to say when we got the chance to ask them some questions.

“Well, it’s a mixed bag really… I think it would be easier putting that one out to the room:

Alex: “The Beatles, Led Zeppelin, The Police and pop punk stuff, like Blink-182”.

“It’s a difficult one to answer really, we’ve never actually gigged together as a four-piece band. That’s in the pipeline for 2021. Who knows what that’ll be like. Either way, it’ll be an epic laugh”.

“Our music is hard to describe further than rock, we have elements of classic rock, which sometimes has a progressive edge, and sometimes has more indie edge to it. But the best thing about it is that we’re not sticking to any formula when we’re writing, or staying with one particular sound, we’re just doing what feels right at the time. We call it… Orange rock. In terms of our latest developments, we have just released our new record “In His Dreams” which will be part of a four-track EP we plan to release in early 2021. So, make sure you check it out!”

“To be honest, I think the fact that we haven’t actually found a ‘genre’ is the reason that our tracks stand out. There no hard and fast rules we stick to when we write and develop out tunes. Anything goes. We all have pretty different music tastes outside the band, so we bring elements of that to Wolforna in our writing, which creates an eclectic mix that’s interesting… Or so we’d like to think! We’re also not afraid to throw a sax or piano solo in the mix where it suits”.

“First and foremost, to survive the ‘Rona and make it through to next year. Nah, but in all seriousness, we’re just cracking on with writing and recording new material. We’ve only been a four-piece since March, and the first few months we couldn’t even meet in person, so the past few months we’ve just been getting our groove as a band. We’ve released 2 singles since August and are now working towards the release of an EP (Release tbc) But that will probably take up the rest of our 2020. Exciting stuff”.

“Oli’s ability to drink a litre of rum in one night, and survive to tell the tale… Oh, and if we had the chance, playing a gig on the side of an Alp, which causes an avalanche that covers the stage, but we dig ourselves out with our guitars and continue playing the show”.

“I think we’re probably in the same situation as most other artists at the minute… Not that we know of! We’re keen to get back out there and play some shows but it’s up in the air at the minute, that’s why we’re just cracking on with making new material. As soon as the opportunity comes though, you can bet we’ll be on that stage quicker than you can say corona”.